LUBOCHKA: THE LINK BETWEEN CRAFTMANSHIP AND EMOTIONS

If we were to speak about what moves an artist to create, we would have to mention a host of emotions. Art is not always seen and valued in the same way by everyone and that’s because, in a design, we find something which we don’t always comprehend. Something that goes beyond the human eye.  There is a very personal bond between the artist and his/her work.

I don’t believe I could have found a better example to represent this philosophy than Olga Dubovik, a young designer from Angarsk – a small city in Siberia – who, through craftsmanship, decided to materialize her emotions under the name Lubochka.

Olga’s origins have led her to explore countless ideas over six years, being able to capture that peculiar world which inspires her and which she shows us on her Instagram. – @LubochkaBcn – Through leather swatches and colorful details of pieces which end up being nothing or becoming one of those handmade bags that have managed to enamor a very diverse public.
In fact, it wouldn’t be odd if we’d run into one of her characteristic handbags while strolling through Japan, Greece, Hungary, Switzerland, Italy, the United Kingdom, Romania, Ukraine, New Zealand, Venezuela, Mexico, South Korea, Indonesia, Hong Kong, Canada, Russia, France or Spain…
Olga Lubochka as her “way of life”, as the brand grows, changes and evolves along with her.
We spoke with her so she could tell us about the name “Lubochka”, her work philosophy and the true meaning of letting oneself go.

SO BLUE: Hi Olga, tell me a little about your origins. Where are you from?
OLGA: I was born in Angarsk, a small city 50km from Irkutsk.  At 14, I moved to Spain, first settling in Igualada and later in Barcelona. This year I’ve returned to Igualada with a family project.
SB: How did you decide you wanted to make handbags?
O: I think I’ve been making leather accessories for six years now. It sort of just happened. Before I knew it, days had flown by and I was still sitting at my sewing machine.

SB: And in this process of being with your sewing machine, how did you come to choose Lubochka as your brand name?
O: Lubochka comes from the female name Lubov, which in Russian means Love. It’s also my mother’s name.

SB: I’ve noticed that each of your handbags has a name (Mashka, Mumudina, Agatha…) is there a story behind this or are they chosen at random?
O: Well, it depends on the moment, most of them are women’s names. I let myself be guided by what I’m feeling when I’m designing the handbag. There’s no strategy behind it.

SB: As an artist, you have a great ability to create. Tell me a little about your creative process. What does it entail?
O: I let myself be guided by intuition, or simply when I feel like it or have the need to create a new model.
First, an idea pops into my head and it’s there for a while, shaping itself until I begin with some trials. From there, I go perfecting it. It’s true that there are some models which have been in there for a long time and still haven’t seen the light of day. I hope you’ll see them soon.

SB: Is there something specific which inspires you?
O: I don’t usually look for a theme and get inspired by it. It’s quite the contrary, something pops up and inspires me. It can be a very small detail. Like a tiny seed growing and forming itself.
In general, travelling or living experiences inspire me.

SB: What type of leather do you work with?
O: The leather I use is usually bovine, both with vegetable tanning as well as chrome. I only work with two tanners from Igualada. They are family businesses with loads of experience in the sector. 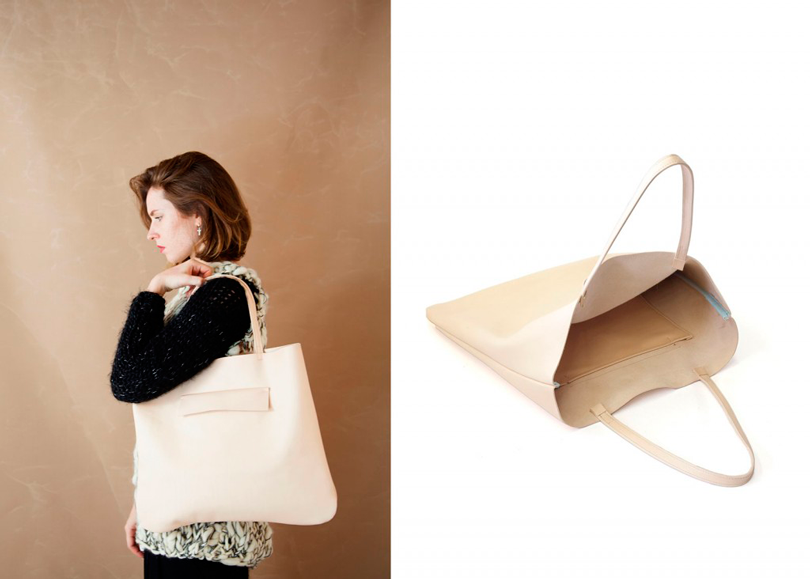 SB: Your handbags are sheer craftsmanship so I suppose there’s not a great team behind them…do you make each bag per request or do you have points of sale?
O:  At the beginning I did everything per request. Now we have more of a stock, but most of the handbags are made to order for both clients from my online store and clients from stores that sell our bags.

SB: Who are your bags for?
O: All sorts of women. I don’t picture one type of profile. I simply design things that I like. And I’ve sometimes been surprised with how different my clients can be. For every woman, there’s a moment in life or an occasion for which she’d like to have a Lubochka.
SB: Do you have any future challenges?
O: The challenge is to perfect what I do. Slow, but steady. Lubochka is more of a personal challenge.

SB: And mixing your personal and professional life…What is the next step for Olga and Lubochka?
O:  I’m going to be a mum for the second time in July. That is, without a doubt, the next step…I’ll let myself go and I’m sure it’ll be very inspiring.
TEXT by Virginia Cámus